You may notice that compact devices or portable devices (tablets or laptop such as the 2 in 1 laptop or pocket laptop itself) do offer video extension option. This make total sense as often portable devices are heavily used by travelers  (for business purposes for example), and they may need to hook it up to a bigger screen (such as projector) for specific reason.

However, its a trend that portable devices starts to introduce the micro HDMI port as the option to extend its screen. This make total sense too as portable devices often go with smaller option, hence safe space and design.

In this case, the UGREEN Active Micro HDMI to HDMI VGA Video Converter Adapter may come in handy. 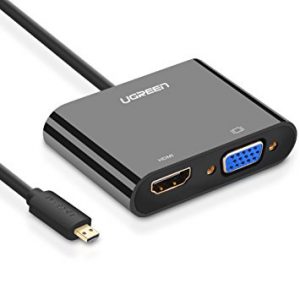 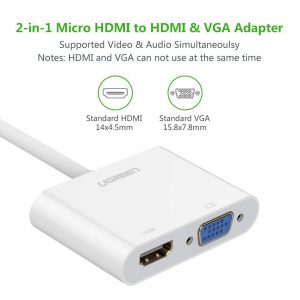 It converts the micro HDMI to either HDMI or VGA output option (note that only one of the port can be used at a time not concurrently). These two ports are pretty much the most common input option available in the market (at least up to date).

How this device works? The following image illustrates it well. 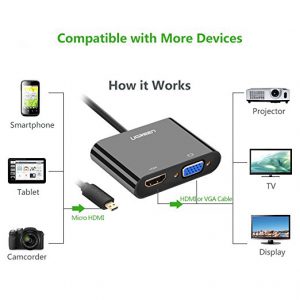 As simple as that and its not very bulky, hence, if you are someone who tend to need to extend your portable device to a bigger display this converter would be handy to you.

In this case, you may still need to bring along the respective cable(s) for example a HDMI to HDMI or VGA to VGA cable respectively not unless the display that you intend to extend your portable device with provides (which usually they do).

Tech it out the details or if you would like to own one of this device for your convenience here.